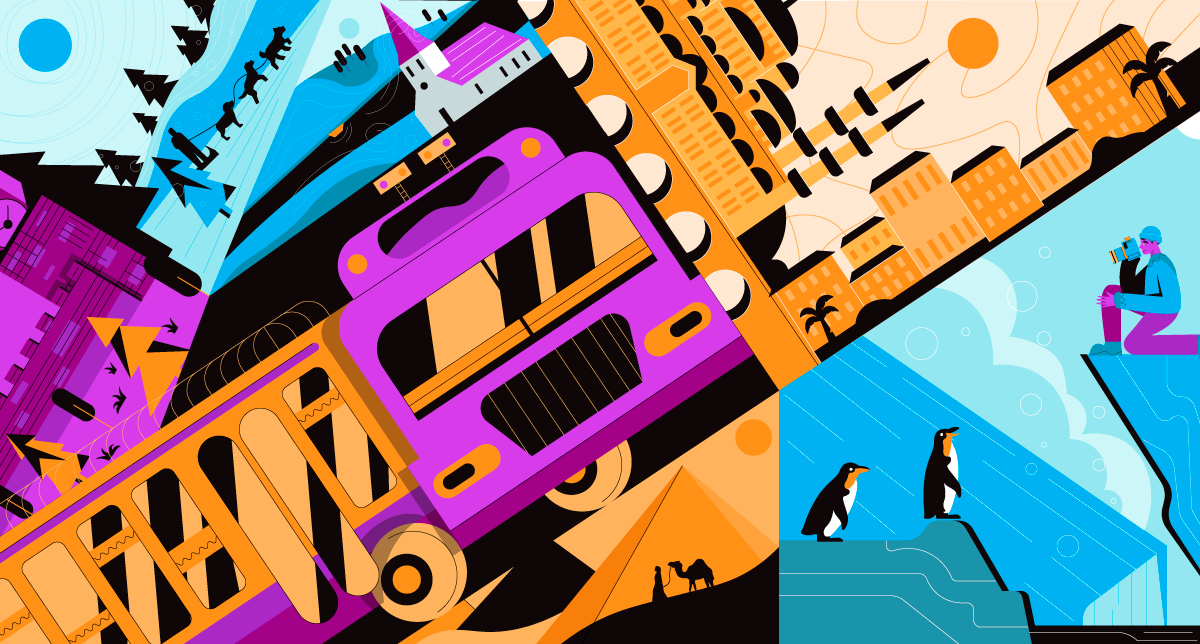 How to Develop Your Sense of Adventure

My parents owned a travel agency on the North Shore of Massachusetts and just after my thirteenth birthday they took the family to France. My father rented a car and soon the busy streets of Paris gave way to a lush and sprawling countryside dotted with tiny fromageries and ancient vineyards — a landscape unlike any I had seen.

In the walled medieval city of Carcassonne —its ramparts still standing proud — we had a gourmet dinner that tested my teenage patience. Lounging in a small library afterward, I ran my eyes over the bookshelves, convinced that in a castle there had to be a secret passage. My parents assured me otherwise and dragged me off in the direction of bed.

Before we could get to the stairs though, I broke from them and dashed back to the library, pushing on books until…a panel of leather-bound tomes popped open, revealing a bustling kitchen beyond.

This small revelation — that curiosity can open hidden opportunity — has stayed with me and shaped much of my perspective in the corporate world and beyond.

Whether it’s the courage to wade into the choppy waters of leadership or the spark to push forward new ideas that challenge the status quo, how do we cultivate a thirst for the powerful equation of risk and reward?

Andrew Evans, host of National Geographic’s Hidden Gems and author of The Black Penguin, has reported live from all seven continents and traveled to more than 100 countries. He’s traversed external and internal terrain to reveal the promise of what a sense of adventure holds and tapped into how to rekindle that flame time and again.

What are three elements to possessing an adventurous spirit?

You have to be curious. You accept your own self, your own worldview, your family, your environment, but you immediately are wondering what lies beyond. Curious to a degree that you’re willing to get hurt. I think that’s what keeps most people from being curious is they are just too paralyzed by the fear of getting injured along the way.

Overthinking gets us into trouble, especially corporate overthinking because it kills creativity. You are making your landscape infertile. Nothing new will grow in it.

We have access to incredible information, learn as much as you can. That’s different than over-analyzing. Learn, listen. I grew up in a small town in Ohio. I would go to the library and check out Peruvian bands from the seventies. You want to listen to the world, let that inspire you and follow the things that you fall in love with.

In taking adventures — risks — how do you manage fear?

This is how I began to travel in my early twenties: I put myself in a country where I couldn’t even read the signs. I had a little bit of money in my pocket, not a lot, and just tried to figure it out.

I met wonderful people. You force yourself to depend on total strangers. You realize that most people in the world are kind and generous and human, and we’re on the same team. Part of overcoming my fear is knowing that I can help others overcome their fear.

The greatest antithesis to fear is empathy.

Do you think there’s a right time to take a risk versus play it safe?

I think most people act too late. When you’re feeling comfortable and everything looks good, then you need to shuffle the cards. We’re all moving objects in the galaxy and the status quo never remains. So, don’t get comfortable and be ready to pivot.

What’s one of the greatest rewards you’ve received through risk?

Meeting my husband. I saw him on a crowded dance floor. I went over and introduced myself and talked to him. And 20 years later here we are. That’s a risk.

So many people are too afraid and too embarrassed. What’s the worst that can happen?
They say, no. They laugh at you. They tell you to go away.

But what’s the reward? The reward is true love for the rest of your life.

If all of humanity became more adventurous overnight, what do you think the world would look like?

So many of the systems that we depend on in the world be they nation states, be they military, be they international business, depend on us being afraid of each other and us being segregated. Adventure pushes past all of that.

While some may make the argument that if everybody was equally adventurous, we would just have chaos, I disagree. Adventure is not just one thing.

My sister is blind. For her, walking down the street is an adventure. It’s a huge amount of risk just to step outside that door and to do that. For somebody else it might be bungee jumping. Somebody else, it may be investing in a foreign company that is starting up.

Think about the first man on the moon who took that first small step for man and then one big step for mankind. Adventuring is taking that second big step.

It’s saying this little step is not enough.