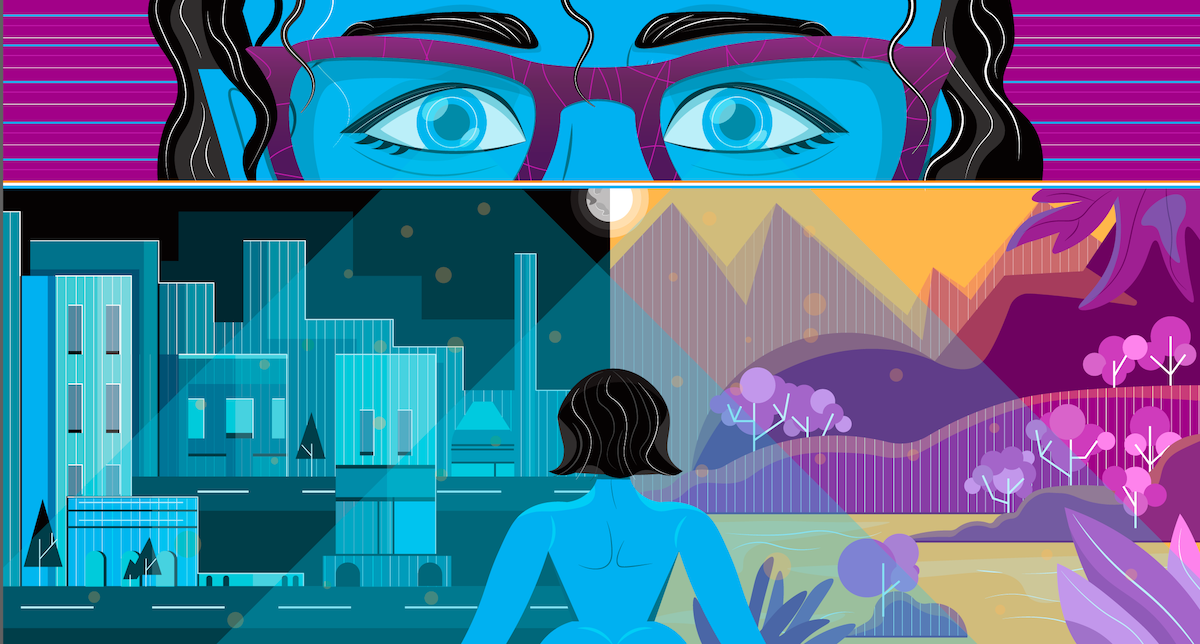 Fine then,
I’ll take it, the tree seems to say, a new slick leaf
unfurling like a fist to an open palm, I’ll take it all.

As a child in Guilford, CT, the idea of nature made me lonely. I looked with disdain at the trees in my backyard. I blew out my hair in a sleek, unfussy bob with bangs. I hid my fear of wildness — of letting go — behind my laser-focused ambition. Nature was messy, and I didn’t have time to climb trees if I was to climb to the “safety of success” promised by grinding hard work. One afternoon at school, I was stopped in the hall by my health teacher who recommended I take a mental health day. I was burned out by 7th grade.

In my early teen years, I spent hours poring over magazines of modern design, ripping out images of slick black coffee tables, skyscrapers, crisp martini glasses, and arranging them in collages in a big black binder I held close like a bible. There wasn’t a crumb of green. Something about the hard angles, the lack of fuss, the certainty of the shapes of this future, made me feel grounded and safe. No questions here.

After college, I found my way to those black glass and silver towers in New York. I was living my childhood fantasy of the high-strung cosmopolitan life, and it came to a halt when I was laid-off from a dream job in off-Broadway theater at 25. My painstakingly constructed world  disintegrated into an abyss of questions and open time. Disillusioned and terrified, I threw myself into an array of creative outlets that demanded vulnerability, and gave me permission to be raw and messy before my over-structured mind could catch up. In acting and movement classes, improvisation, and comedy, the pathways in my brain softened like dirt roads in the sun. I was ravenous for mental freedom.

I opened up to the experience of wildness slowly, skeptically, like a broken bottle pummeled into softness by the ocean. My clothes got baggier. My hair became unruly. I started being late more of the time, without spiraling into a cycle of self-flagellation. I lay on the floor and listened to cello music. I stretched. My days filled up with spontaneous conversations. I was making far less money, I was working as a replaceable, prestige-free cater waiter… and I was feeling alive.

The unruliness of nature snaked its way into the corners of my mind, like grass finds its light in a broken sidewalk. In tandem, I started keeping cacti in my apartment, then succulents, then vines. I’d sneak away to florists and nurseries, where I’d pet the silky leaves as if they were rabbit ears, and bury my face in pots of herbs. I read a borrowed book — with the shades drawn — about crystals, lest I be judged. I read another about cultivating awareness and presence in my body, which in turn led to a book about an anthropologist in the Amazon studying how plants communicate with indigenous people. As my analytical mind gave up the stranglehold of cemented structures, the avalanche revealed an enormous curiosity beneath, at the crossroads of science and mystery, about the consciousness of nature and the interconnectedness of everything, including me.

Wildness of thought is a forest of rebellion.  My exploration went against the hierarchies and systems into which I was born: the myth of nine-to-five salaried safety, a suffocating sense of ‘professionalism’, stress as a status-quo. In a way, constantly asking myself what I wanted was a rebellious act, since it had nothing to do with what I’d been shown I should want. Playing by society’s rules meant moving at a certain speed, delivering what was expected of me at a volume and pace incompatible with my natural state. The moon is only full once a month; why am I expected to burn that brightly every day of the year?

Once I’d come to realize that an incalculable breath of aliveness runs through everything, I couldn’t help but listen to the wildness inside me. Wildness was not chaos; it was allowing myself to grow in erratic directions like a vine, according to what I needed to thrive. For me, that meant permission to be slower. It meant letting the old ways of being die; a continual crumbling to dust and then re-sprouting, over and over again.

Wildness meant allowing for honest change within myself. It meant not suffocating my roots in a small pot but replanting in larger and larger containers until I was woven into the soil of the whole garden. I was more a part of the world, and less apart from the world. Now, how much more could feed me! How much more available I was to receive love, strength, and inspiration from a wider pool of resources. And with access to those resources, I’m exponentially more able to bear fruit to give the world as well. That’s human photosynthesis.

It feels like no accident that I’ve spent the past year working for a company whose mission is to inject empathy and authentic connection into remote workspaces. Every day, I get to pay forward the wisdom that the trees in a forest function better and live longer than those planted alone.

Recently, I drove across the country from LA to Guilford, CT, to the house where I grew up. As I pulled into the driveway, my mother was waiting for me, garden hose in hand, surrounded by her verdant wilderness. I emerged from my car with a lion’s mane of hair, and ran to her. I choked up as she wrapped me in her strong, sinewy arms. Through a blurry lens, I saw the young birches and the ancient firs swaying lightly in the yard and wondered what it would be like to climb them.

The past few nights, back in New York, I’ve been climbing onto my fifth-floor fire escape naked. The surrounding buildings are all at least two stories shorter, so no one can see me, and there’s a clear view all the way to the Kocziusco Bridge. In the warm, late summer breeze, bathed in moonlight, I stretch my arms wide, expanding into the wildness without and within.

Lyssa Mandel is a writer, actor, comedian, storyteller, and perpetual student. She's the host and producer of The Bitch Seat podcast, a therapy/comedy talk show (and tell) about the universal vulnerability of childhood, and the host of What's Betwixt Us powered by zanie.app, a podcast about working while human. Empathy first and always. lyssamandel.com.